Before it’s possible to push boundaries with art, there must first be an audience to be pushed. Enter Seattle’s Relay Dance Collective. Since 2013, the group has focused on creating a broad appetite for dance and producing sold-out performances that co-workers and families feel welcome attending. RDC has also made an ongoing effort to create community in the Seattle dance scene—just this year the group hosted a series of free dance improv workshops led by Ella Mahler aimed at being a safe space for experimentation. At the culmination of its fourth season, the group presents PRIME, a concert featuring work by Mahler, as well as six other other varied voices from the Pacific Northwest on April 15-17, 2016 at Velocity Dance Center. SeattleDances reached out to the PRIME choreographers to learn more about each piece in the show. 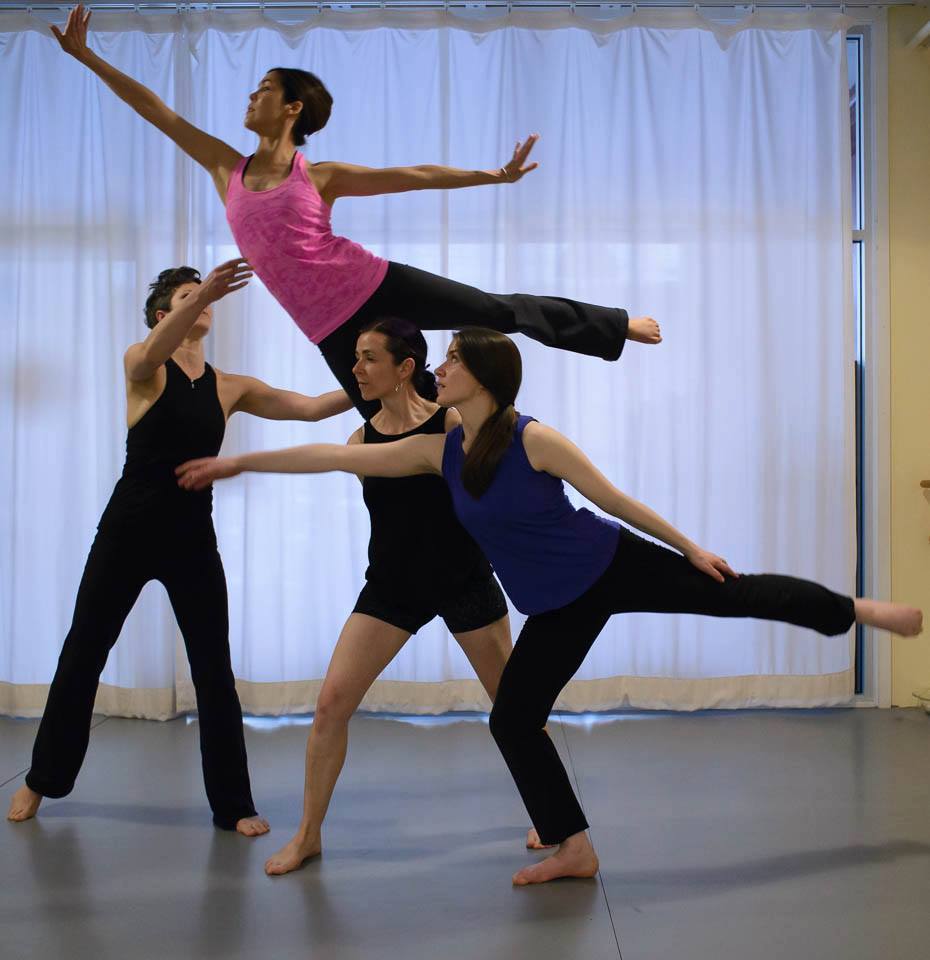 My piece was inspired by a cynical, even misanthropic, mindset. I think a lot of us have been feeling disappointed, overwhelmed, and broken-hearted by the current state of affairs. Whether it’s U.S. politics, the rapid expansion of Seattle, or the degradation of our planet, we are asking ourselves, “How did we get here?” This dance contemplates that question. I hope that in reflecting on our uniquely human qualities, we gain greater understanding of our nature, our tendencies, our gifts, our weaknesses, and our downfalls. And with this pause, we gain clarity on how to direct the course of our species. As a dance-maker, my aesthetic has been described as “organic,” which I like. But I’d have to say it’s seeking organic while being admittedly, inescapably balletic. Despite my love of structured vocabulary, my dancers and I took a highly collaborative approach in the studio. We spent our first few sessions creating movement that reflected those qualities we view as uniquely human, traits which distinguish us from the way other species have evolved. The work asks how these traits can be used to steer us both toward progress, as well as toward our potential downfall. 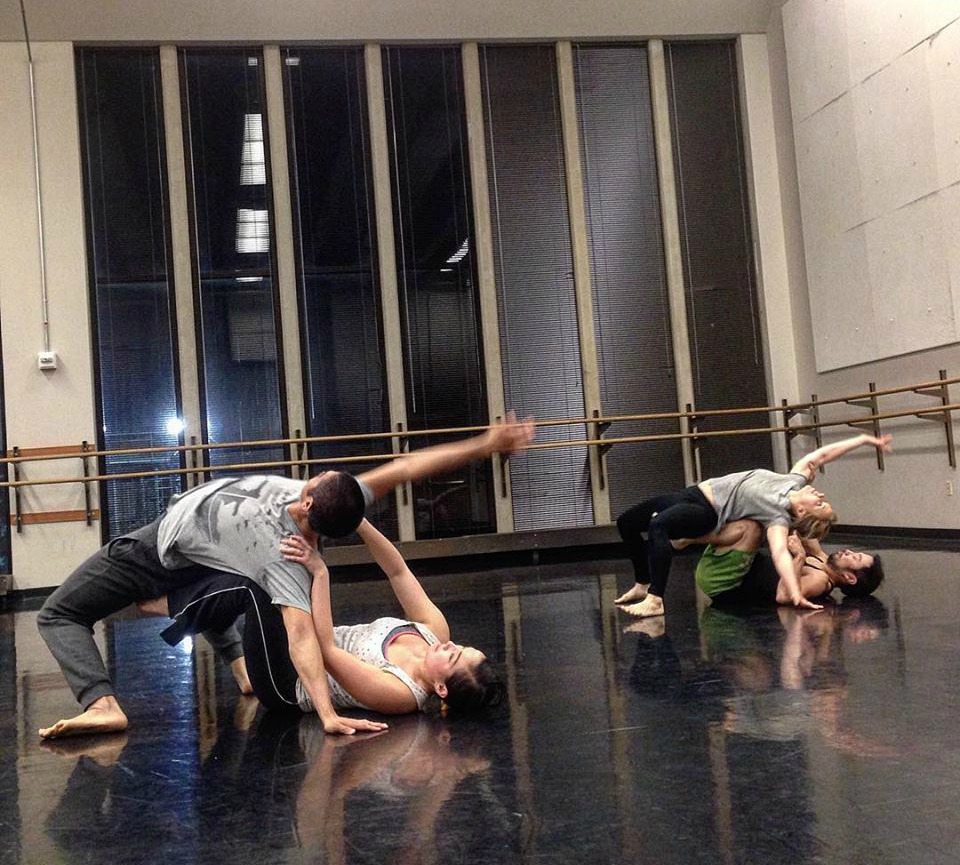 Lauren Edson: Below the Surface

My movement is very physical and often contains complex partnering and ensemble work. I am interested in the physicality we all naturally possess; thus, I imbue work with gestures and pedestrian qualities. I’m continually investigating how my own movement vocabulary blends with the artists I’m working with and how each can inform the other. Below the Surface was created three years ago. I was four months pregnant with my son Finn. At the time, I was grappling with so many emotions about becoming a mother and was both incredibly excited and incredibly scared. Although the work is very personal and comes from a very clear time period in my life, I believe it reflects a collective consciousness. The emotions that bubble into our lives often overtake us, and we are left wondering how to deal with them. I was very much interested in looking at the work with a new lens and fitting it to the dancers of Relay Dance Collective in a more authentic way. We changed certain sections that felt inorganic and spent much time talking about the motivation of movement and character intent. It has been wonderful to see the work take on new life.

My piece is like an episode of The Twilight Zone set in Old Hollywood. I grew up watching classic films like The Good, The Bad and the Ugly and How to Marry a Millionaire. Thanks to some pretty radical upbringing, I delighted in the eye-candy of the “pretty ladies,” but also learned to take these archetypes (the geisha, the cowboy, the bombshell) with a grain of salt. As a choreographer, these characters are what inspired me; I was interested in how people are allowed to participate in popular culture based on their appearance or their identities. For example, Asian American male actors are seldom cast as the romantic lead. Their race is what relegates them to the role of the sexless jester, the butt of a joke like Long Duk Dong in 16 Candles, or the wise, emotionless martial arts master like Mr. Miyagi in The Karate Kid. I worked with Gabriel Ghirardini (DJ Idlhnds) to create a score that includes recognizable moments from cinema, as well as textural sounds that take you into the world of movie-making. Angela Kiser (On the Precipice Productions) has created an eerie video projection that is truly a stand-alone piece of art. In the studio, I asked my dancers to reflect on ways in which their own race, gender, and sexual orientation have led them to be treated as one-dimensional stereotypes. When these red-lipped ladies and dapper gents convey glamour in the dance, there’s also rage boiling beneath it all. Whether you’re a celebrity from 1950, or a millennial dancer in 2016, it takes a toll when you’re not allowed to be yourself in all colors, dimensions, dualities, and contradictions.

I often visit a record store named Wall of Sound. (And when I found the music for this dance, this was when you could listen to CDs before you bought them.) It was here that I stumbled upon this French pop music. I used this music a couple times, including for a commission with a Seattle company. One the dancers in that group reminded me of Brigitte Bardot. Having grown up in the ‘60s, I had a fascination with French cinema, which is probably the biggest reason for making this dance. I wanted to create a work that’s fun and provocative—something that speaks to the power of sensuality without being lewd. The choreography has a funky style that feels specific to a certain period in time. The vocabulary has very specific timing and shapes. At some point, I also set this work on teen dancers for Dance Fremont’s teen company, Fremont Danceworks! (in which several RDC dancers used to perform). Getting to create a new version of this again with new clarity, and on outstanding women performers, has been a real reward. I loved how each dancer brought uniqueness and her own sense of artistry to the piece. 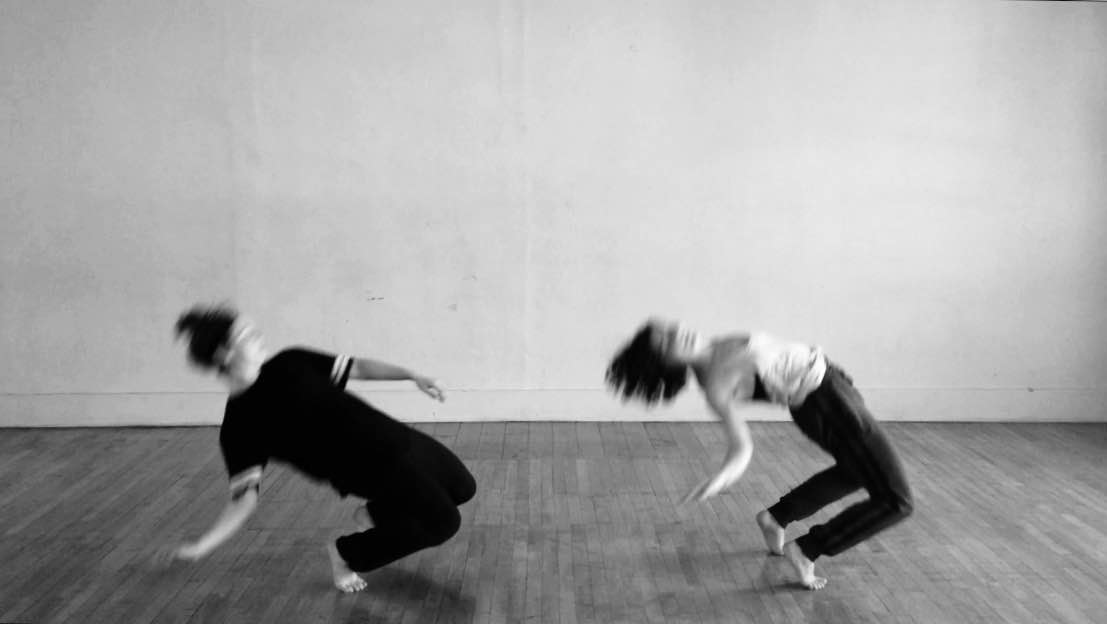 Anna Krupp and Jenna Eady in rehearsal for Ella Mahler’s This and this, too.
Photo by Ella Mahler

Ella Mahler: This and this too

My work examines elements of scale, perception, and impact. In rehearsal, the dancers and I often say this dance is a duet of duets—micro-dances bridged together through changing contexts, rigor, textures, and intensities. There are moments of our most “human” selves, as well as moments of surreal sensation. I am interested in how we experience and relate to both. This is a brand-new work created with dancers Anna Krupp and Jenna Eady. Each of them brought a tremendous amount of willingness and curiosity to this process, as we investigated all kinds of imagery and concepts through improvisation and phrase work. Additionally, the sound score is an original work by composer (and my brother), Dustin Mahler. Dustin joined our process later in the game, creating sounds and textures that are rooted in similar sensations or images that informed the movement of this piece. Between the four of us, this process was quite collaborative; I heavily embrace the artistry and critical exploration each artist brings to the work.

While my movement aesthetic always contains strong jazz and ballet themes, I took a much more modern dance approach to creating this work. I really wanted to highlight the strengths of my dancers and create phrases that were organic to their bodies, yet could be manipulated to create a dynamic ensemble performance. I liked this approach because it put more responsibility on the dancers to be invested in the work. While I went in with some idea of what I wanted to do, the overall inspiration, title, and feel of the dance are things that all chose themselves. I hope that the audience sees their own stories in the work. To me, this dance has been about accepting the things that don’t necessarily go your way. There will be many people in your life who will judge you and whose actions will bring you down. You have to keep doing you and being true to yourself.

There are many different things that have inspired my piece. The three main elements are the image of a metal sculpture, music, and my own experience of being a cancer survivor. The metal sculpture depicts a woman standing, and it almost looks like the wind is blowing through her; there’re these pieces of metal flying off the back of her. Something really spoke to me about that image: this strong-looking woman facing the world, and then all these pieces of her blowing away. This ties into my second inspiration—my experience as a cancer survivor. To me, the sculpture signified how time keeps moving forward, but there are all these different bits and pieces from our past, that make us who we are. I’m now four years out from my diagnosis, and I feel stronger from the experience of survival, but the cancer is always there. My life has seemingly continued to move forward, but the cancer will always be a part of my existence. The third thing is the music. I love all the different interesting sounds that the composer Hauschka uses. Listening to his music makes me curious to explore different ways of moving either with or against the music. It is a huge inspiration for my piece.

It’s hard to use terms like “event of the season” without sounding cliché, but if you want to be on the pulse of what’s happening in Seattle’s dance (or nightlife) scene, Drama Top’s Boys! Boys! Boys! is not to be missed!

Space 50: a variety show drawing from human curiosity about outer space, as represented in pop culture, mythology, science, and more.